Training MMA in a war zone 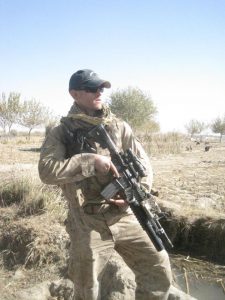 Even in hell, training was a must.

Chris Mesnard proved this during his second deployment to Afghanistan in 2011. Just 22-years-old at the time, the American gathered some buddies who were also part of the 3rd battalion, 3rd Marine regiment and created a makeshift gym out of equipment that was lying around.

“Surprisingly, a lot of the staff and some CO’s were not happy about having a fight gym. They thought people were going to get hurt,” Mesnard, a guest at Tiger Muay Thai & MMA Training Camp, Phuket Thailand says, “But the Colonel was cordial and he supported it 100%. Nobody got hurt, it was all good training.”

Mesnard (4-1) discovered MMA before enlisting as a Navy Seaman. After watching the entire first season of UFC’s The Ultimate Fighter, he decided to step into the gym and train. He’s the first to admit he had no idea what he was doing, but he would spar with other guys, figuring things out along the way.

This led to his first MMA fight at 18-years-old, a bout he won in 47 seconds of the first round via armbar. Three more fights followed, all wins. Then he enlisted in the Navy and became a corpsmen – treating wounded soldiers on the battlefield.

Training became an escape from the grind of war.

“It’s Afghanistan, so you’re going to patrols everyday. On your free time, you get to do whatever you choose with it. Some guys sit in their cot and watch movies. Others workout,” The Nebraska-native says.

After 8 months in Helmund Province in 2010, Mesnard was sent to the Pakistan-Afghanistan border (Forward Operating Base Delhi) for a similar amount of time.

“It was a bit larger so it had more resources. A couple of the other guys like to train as well so I started grabbing all kinds of gear: tires, chains, mats, gloves, bags, etc.,” he says, “we just built everything that we needed for circuits and fight conditioning.”

In temperatures that can climb upwards of 40 degrees celsius, the fact that Mesnard chose to train shows his love for the sport. 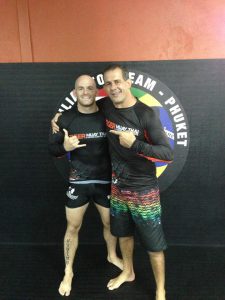 “It was just a nice escape. The entire time I’ve been in the military, my brain has been somewhere else,” he says, “Especially in Afghanistan, dealing with all that, you feel cooped up. It was a great way to get all your frustration and anger out.”

For now, Mesnard spends his days training Muay Thai and refining his Brazilian Jiu Jitsu (since he is a blue belt) at TMT with trainers Robert “The Terminator”, Fernando Maccachero, and Roger Huerta. As a former training parter of UFC fighters Jake Ellenburger and Houston Alexander, Mesnard also says he’d like to get back into that grind when time allows.

“I want to train full-time, I want to fight. I still keep in touch with the guys I trained with (during deployment) and it’s always on the back of my mind what we’ve been able to accomplish in a war zone,” he says.