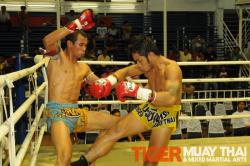 On May 24, Ritt moved his winning streak to seven as he scored a 2nd round KO with a hard elbow that dropped his opponent.

Stunned, the Thai fighter tried to rise, but still dazed the referee stopped the fight. 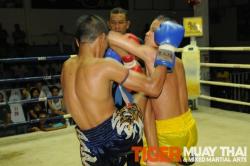 Cyrus took on last minute replacement veteran Muay Thai fighter Santatuk and showed his speed and youth were too much for the veteran fighter as Cyrus scored a 2nd round KO.

Mon, the underdog against a taller and more experienced fighter from Krabi listened close to his corner and Master Kay.

Finding his opponents weaknesses, he kept to his game plan and scored a nice 4th round KO.