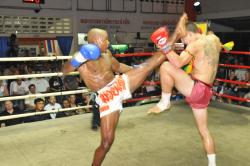 This was a rematch from their first fight which Harlee won on points, but where Cyrus almost scored the KO. It seems a grudge match will be in the making. Cyrus and Harlee are considered pound-for-pound two of the best foreign fighters on the island of Phuket.

Charlie scored a 2nd round KO last night defeating his Thai opponent that had the experience edge while Charlie was bigger and caught his opponent with the “Superman” punch. Good fight.

Simon continued his impressive performances as he dismanteled his bigger opponent winning on points on February 20, 2010.

“He just picked his shots then stepped back and then scored again,” said Head Trainer Kru Kay.

Watt back in the ring again, lost in the 2nd round with his 2nd fight in just over a week. Watt has the heart of a Tiger and will surely be looking for redemption.