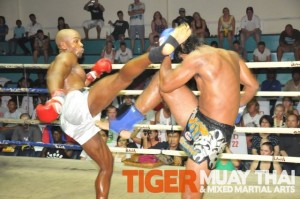 Tiger Muay Thai and MMA training camp, Phuket, Thailand fighter, Cyrus Washington is set to compete in a “Bare Knuckles” style Vale Tudo fight across the border in the military ruled junta country of Burma on September 26, 2010.
These type of fights are outlawed in Thailand but draw large crowds and gambling atmosphere show in the hit hollywood movie Kickboxer starring Jean Claude Van Dam.
Washington will need to be looking his best and bring his Black belt skills in Tai Kwon Do and Jeet Koon Do along with his skills in Muay Tha to compete in the brutal style of Burmese bare knuckle fighting which has few if any rules.
Head butts and other illegal in Muay Thai strikes are legal in these non-sanctioned fights where guests come merely to see blood and the fierce skills of the men fighting. Washington, never one to back down from an opponent and who gives himself completely over to fight sports is looking at this as a long awaited experience to fight in an event offered in few places in the world legally.