50% OFF "TMT RE-OPENING SALE" LIMITED OFFER! Book and train anytime starting from the 1st of Aug until the 30st of Sep 2020 and get 50% OFF on Training + Accommodation. (click here to book) 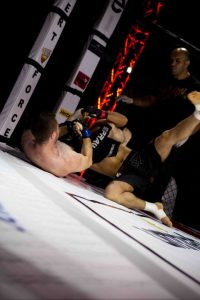 Mixed Martial Arts has truly gone global. After Middle Eastern entertainment company, Flash Entertainment purchased a portion of the UFC, the entire region has seen a surge of MMA promotions. One of the regions most prestigious events is called Desertforce and is held in Jordan.

Tiger Muay Thai and MMA training camp, Phuket, Thailand Alumni Ammar Tchalabi competed for Desertforce won his fight via armbar in the first round. Having trained at Tiger Muay Thai with BJJ Black Belt Ray Elbe, Tchalabi returned to Saudi Arabia to finish his training camp this win was an impressive showing.