UFC 127 in Australia was one of the fastest sold out events for Mixed Martial Arts in 2011.  The fight card was highlighted by 3 Tiger Muay Thai alumnus, which was motivation enough for Tiger Muay Thai and MMA Phuket’s head coach and Brazilian Jiu Jitsu Black Belt Magical Ray Elbe to attend live.

In the Main Event Jon Fitch looked to improve his 13-1 record in the UFC as he faced multiple division champion BJ Penn.  In a controversial bout that was ruled a DRAW, Fitch dominated the final round scoring a 10-8 on two of the judges score cards.  With his only loss coming by decision to GSP, Fitch has earned his shot at a rematch for the UFC Welterweight belt and should be facing the winner of GSP Vs. Jake Shields  (also a TMT alumnus) later this year. 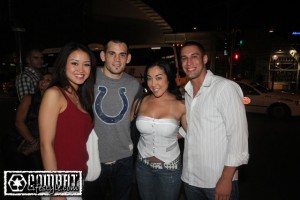 Brian Ebersole a former guest instructor at Tiger Muay Thai and a veteran of 60+ professional MMA fights made his UFC debut against title contender Chris Lytle.  Accepting the fight on two weeks notice as a last minute replacement for former WEC Champion Carlos Condit, Ebersole was a 5-1 underdog.  Utilizing an unorthodox striking style and capitalizing on several Muay Thai knees and Elbow combinations, Ebersole won a unanimous decision 30-27.  Dana White awarded his performance with a 70,000$ Fight Of The Night Bonus.

The third bout featuring a Tiger Muay Thai and MMA Phuket alumni was Jamie Te Huna against Swedish superstar Alexander Gustafsson. Te Huna a native of N.Z. now living in Australia, donated 100% of his fight purse to the recent Australian flood victims (a gesture that was matched by the UFC).  Looking to capitalize on his wrestling, Te Huna got caught in a scramble and was forced to submit to a RNC submission.  A disappointing loss, but one that will be motivating as he prepares for his next bout in the UFC.