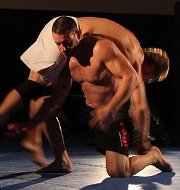 Tiger Muay Thai and MMA training camp, Phuket, Thailand got the opportunity to host 2nd degree Brazilian Jiu Jitsu Black Belt Scott “TNT” Tannenbaum, last week as he was traveling through Thailand on an extended training trip with one of his students and a Muay Thai instructor at his TNT Mixed Martial Arts Training Facility.

Training in Brazilian Jiu Jitsu since the early 1990’s, Scott was competing in “Mixed Martial Arts” back in an era when it was more commonly referred to as No Holds Barred Fighting.

Those traveling through Phoenix Arizona should stop in and check out Professor Tannenbaum’s academy.