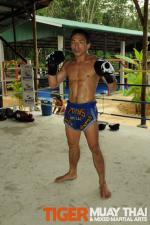 Wing, preparing for his next fight in a 16-man K1-max tournament in Hong Kong and a K1 fight in Japan is training hard 2 times everyday with 4 X Lumpinee champion, Goy.

Wing is an incredible fighter in Muay Thai and K1 style.

He has been working with some of the professional fighters at the camp sparring and training to prepare for hs next big payday in K1-max.