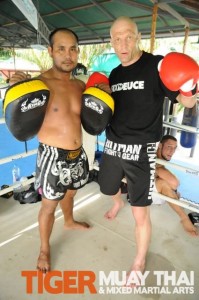 Ross Dallow displayed professionalism and acted appropriate in the ring after the shocking DQ by immediately filing a petition to have the bout overturned to a No Contest—meaning nobody gets the win and nobody gets the loss on their professional record.

Ross explained that the pre fight inspectors rubbed his body down looking for grease, lineament, and other banned substances–finding absolutely nothing. (this is the only job these people are hired to do at the event) He also noted that the ‘scent’ wasn’t apparent during the pre fight-mid ring meeting…and that he cut almost 8 Kilos in preparation for the fight…which naturally forces toxins to exit the body–and make a person ‘smell funky’.

The Australian Fighting Championship has shown their professionalism by having a formula in place for fighters to appeal poor decisions. Working with the Professional Boxing and Combat Sports Board of Australia, No irrefutable evidence was found, and the bout has is going to be officially declared a No Contest on both fighters records.

Ross Dallow wants a rematch. He’s demanded the fight after having his integrity questioned. Now it is up to Jeremy May to accept the bout. This will be an exciting fight and Tiger Muay Thai and MMA Phuket encourage anyone in Australia to buy a ticket to support the Australian Fighting Championships.

Rosco will put in a training camp at Tiger Muay Thai and MMA Phuket, Thailand for this fight and will be more then focused at the task of ‘shutting the yank up’

Those of you in Australia support the local MMA Scene and purchase a copy of the next issue of “INSIDE MMA” on Newsstands nationwide.

Check out the article in INSIDE MMA