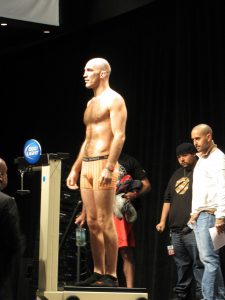 As Brian Ebersole gears up for his UFC FX4 fight against T.J. Waldburger in Atlantic City June 22, he took a few minutes to talk to his Tiger Muay Thai family about his experience so far.

1. How did your training camp?

I had a pretty good camp. I signed my bout agreement in Australia, I spent a month-long pre-season at Tiger Muay Thai, and trained in Illinois for 6 weeks… I hadn’t trained in Illinois for at least 6 years, so that was a bit of a treat. I was able to visit my hometown on a number of weekends, and seek out some talented wrestlers with which to revisit my base.

I touched on every range of combat with specialist in that area, which is something I try to do in every camp…. Finally being able to train in the USA has allowed me to get on the mat with wrestlers again, to complement my ongoing adventures into the world’s of BJJ and Muay Thai.

2. What have been the best and worst parts of the camp for you?

3. How are you feeling going into this fight?

I like the matchup I’ve been given, as it’s a great challenge fighting a young guy with such a dangerous ground game. But it’s one of those fights where I feel some pressure. Being the favorite is much different than being the
underdog.

4. This is your first fight as Tiger Muay Thai’s Head MMA Coach. Are you feeling extra support from your TMT family?

I’m hoping I’ll have a few more fans and interested parties. I’ll have TMT’s Director, Will Elliott, sitting next to my girlfriend, Alecia. So there’s a bit of support there. And having the media department at TMT supporting me with online advertising and such, is quite a nice thing to have. Being able to gain more and more interested viewers, that know my story…that’s a bonus. And it should make for a cool post-fight experience, riding the wave of success and hopefully fielding emails and facebook messages from well-wishers.

Brian also added the following to his message:

“I appreciate the effort and support that you guys have all shown, on each and every trip to TMT. And I’m very honored to officially be a member of the team.

I’ll celebrate this fight with all of you, near and far. And I look forward to my return to Phuket in September, as we gear up for what will be a monumental 2013 calendar.”

Good luck, Brian! We are beyond excited!