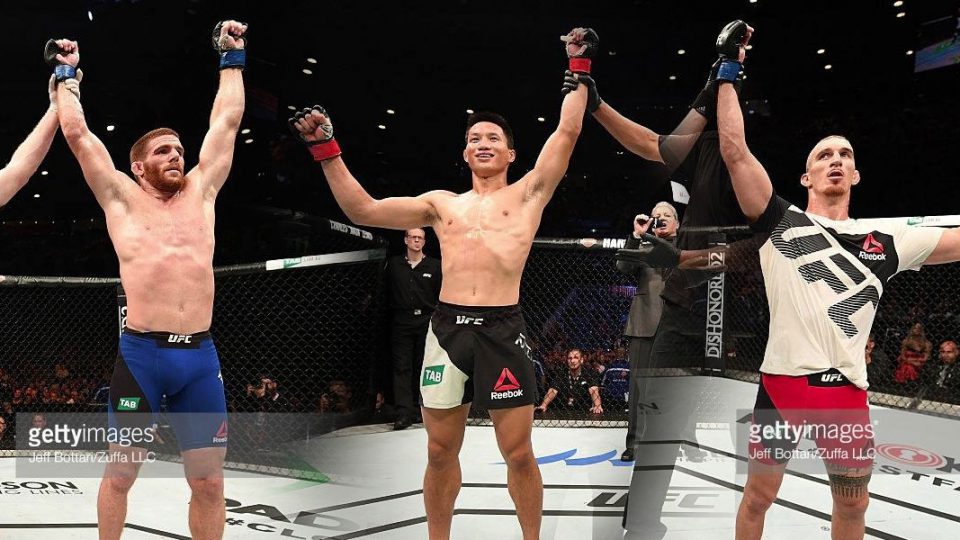 It was a tough and fruitful weekend for Tiger Muay Thai & MMA Training Camp. All the hard work paid off as our fighters had an impressive job at UFC Melbourne.

TMT Fighter Ben Nguyen who was one of the first recipients of the TMT MMA scholarship in 2012 made a dominant win agains Geane Herrera to kick-off the prelim card. Ben Nguyen is now based in Brisbane and trains at Integrated MMA Australia.

TMT Fighter Alex Volkanovski’s UFC Debut did not disappoint and as expected, won in a brutal TKO in the second round. Volkaovski was supposed to have his UFC debut in Philippines which got canceled, but worked his favor as he made a big statement in UFC Melbourne’s main card in front of his home country and a weight category higher than where he usually fights. With the win in his UFC debut, he now has 11 straight victories in his pro career. Alex also trains in his home gym Freestyle MMA in Wollongong Australia together with his long-time coach Joe Lopez.

TMT Fighter Andrew Holbrook knew he was a big underdog in the co-main event and he was neither surprised nor bothered by his position as he took the split-decision nod over Matthews. Holbrook came with his Coach Patrick Mcpherson from Indy Boxing and Grappling in Indiana USA to Tiger as part of his fight preparation. Tristar Fighter Jonathan Meunier came to TMT as part of his fight preparation also to help him acclimatize to the time difference. His teammate and UFC Fighter Nordine Taleb brought him to Tiger. Meuiner took the win via decision against hometown favorite Richard Walsh.

TMT Fighter Daniel Hooker and Ning Guangyou both had close and tough fights but lost the decisions.

We are definitely proud of our fighters whether it was a win or lose outcome. Each and every one of these guys help each other out to become better fighters. Everyone contributes to the cause. We would also like to thank our Strength and Conditioning team lead by Coach Woody who has helped these guys get fit for their fights. Our MMA Team : coach George Hickman, coach Christopher Vamos, coach Alex Schild, The K-1 team Brad Riddell and Bruno Miranda. Thank you to the coaches of each and every fighter that helped out these guys.