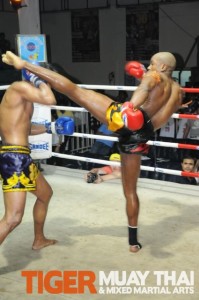 After knocking out his opponent in the 2nd round with a vicious elbow because he had already broken his hand, Tiger Muay Thai and MMA training camp, Phuket, Thailand fighter, Cyrus Washington, found out the fight was just beginning.

Washington had accepted the invitation to fight Myanmar (Burmese) superstar Saw Nga and was watching his opponent being counted out, but the referee didn’t stop at 10 and kept counting giving the hometown hero Nga a chance to recover as they called a 2-minute break.

“He got up walked around with the referee giving him the “Lewhay” 20 count. His corner decided to call a again “Lewhay” 2 minute rest/timeout-crazy,” said Washington.

Nga spent the rest of the fight running from Washington and going to the mat at every engagement of the clinch trying to protect his badly swollen eye from any further damage from Washington’s kicks and clinch.

Washington was awarded the championship belt after the fight despite the hometown judges awarding a draw.

“I cut off the ring or get him in the corner he falls all to aviod getting hit in the eye,normally the referee stops a fight when a fighter avoids engaging out of fear! So at the end they offically declared it a draw but because of him breaking the rules, whatever they were because they kept changing them ,and me beating his ass,they offered me the belt anyway, I refused,” said Washington.