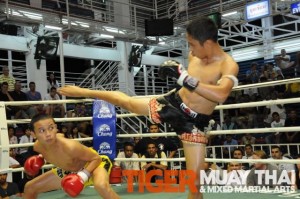 Tiger Muay Thai and MMA training camp, Phuket, Thailand fighters Simon and Kok are headed to bangkok with Ajarn Kay for a pair of fights at famed Rajadamnoen and Lumpinee Stadiums on September 10-12.

Both Simon and Kok have been lighting up opponents in Phuket as the pair are a combined 7-0 in last 2 months with both on 5+ fight winning streaks fighting in Phuket, Trang, and Phang Nga.

Simon under the teaching of his father, legendary fighter and Captain of Tiger Muay Thai’s Fight team “Pairote” or Ajarn Goi has turned into one of the top ten fighters for his age and weight and looks to be on the way to follow in his father’s footsteps.

KoK is already a standout in his weight division with multiple fights in Bangkok and on his way up the rankings ladder.