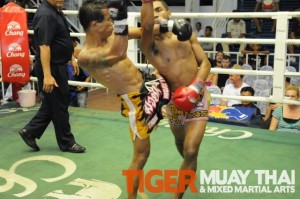 Samson, Jonny, and Chelsea all scored KO’s in their fights.

Chelsea scored an impressive 5 second KO in her first fight as she came out against her veteran Thai opponent and landed a heavy overhand left then followed with a solid knee breaking her opponent’s nose and dropping her in a heap in the corner.

Jonny continued to look good in his return to the Thai boxing ring as he scored a hard fought 3rd round KO bringing his record to 2-0 in his Muay Thai return.