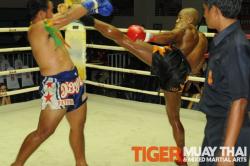 Cyrus Washington, making his return to Tiger Muay Thai scored a 2nd round KO over Jumbo-a using his mix of Tae kwon Do / Jeet Koon Do / Muay Thai. 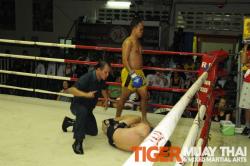 While Michi has the heart of a lion and never backs down from a quality opponent, the legend, Orono, was too much for as Orono scored a 3rd round KO.

Orono will be fightinging on international television and Bangkok TV 7 on next week representing Tiger Muay Thai.

Veronika took on one of Rawai’s best fighters in Nam Wan. In an exciting fight, Veronika lost a decision to Nam Wan over 5-rounds.