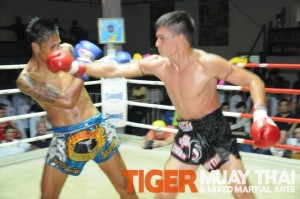 Cyrus scored a 3rd round KO with his famous spinning back kick while Don went four round with a highly experienced Thai fighter cutting him and forcing the referee to stop the fight in the 4th round.

On September 23, Claire won in her return to the ring in Phuket as she took home a points win.

Samson lost his fight on points over 5-round.