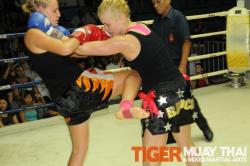 In what was supposed to be a fight with a Thai fighter from Bangkok that cancelled 3 weeks ago, Anna (Sweden) had her fighter changed by promoter at the last minute being asked to fight above her weight class and against a more experienced opponent.

Anna agreed to the fight and fought hard. but came up short losing a points decision over 5-rounds.

No explanation from promoter as to why the other Thai fighter has failed to show two times. 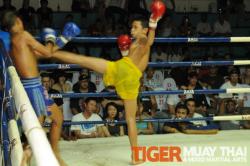 Mon continued his winning streal (3 fights) as he beat his opponent who he had previously lost to several months ago. Mon looked good exeuting technique and has been training with Master Kay and Moo as his instructors.

Mon on his fight on points over five-rounds.