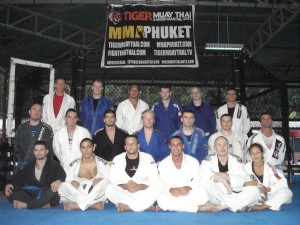 Taking a team of 9 competitors to the Bangkok Blue and White Belt Festival held in Bangkok Team MMA Phuket fighting out of Tiger Muay Thai captured 6 different medals. The event was held at the EMAC training facility and was promoted by Khun Nitti.

Visiting academies included EMAC, BKK BJJ, TMT, 3 Monkees, and Fairtex Banglapee. It was nice to see the schools pioneering Brazilian Jiu JItsu in the Kingdom of Thailand to share an afternoon of competitive matches and friendship building.

Congratulations to all the guys who competed

Following the competition, the group gave Justin Governale and George from the UK a traditional Brazilian Jiu Jitsu Birthday well wishes by making them walk the gauntlet.