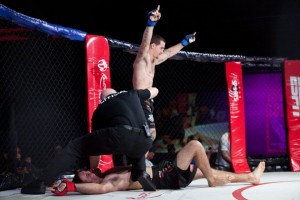 Joe Ray of team FFA, was already 2-0 when he arrived at TMT earlier this year with a KO victory on the Strikeforce promotion.

Going 2-0 in Asia with two brutal KO wins for Martial Combat, no one was surprised by his recent win in Greece against a very Game Julio Gallegos.

During a tough first round Joe Ray showed his Muay Thai clench skills opening up a cut that required the doctor to stop the fight from knee strikes.

Now 5-0 with all fights ending via a finish, Ray has fought in the USA, Asia, and Europe.  Look for more big things to come from the Joe Ray Train!