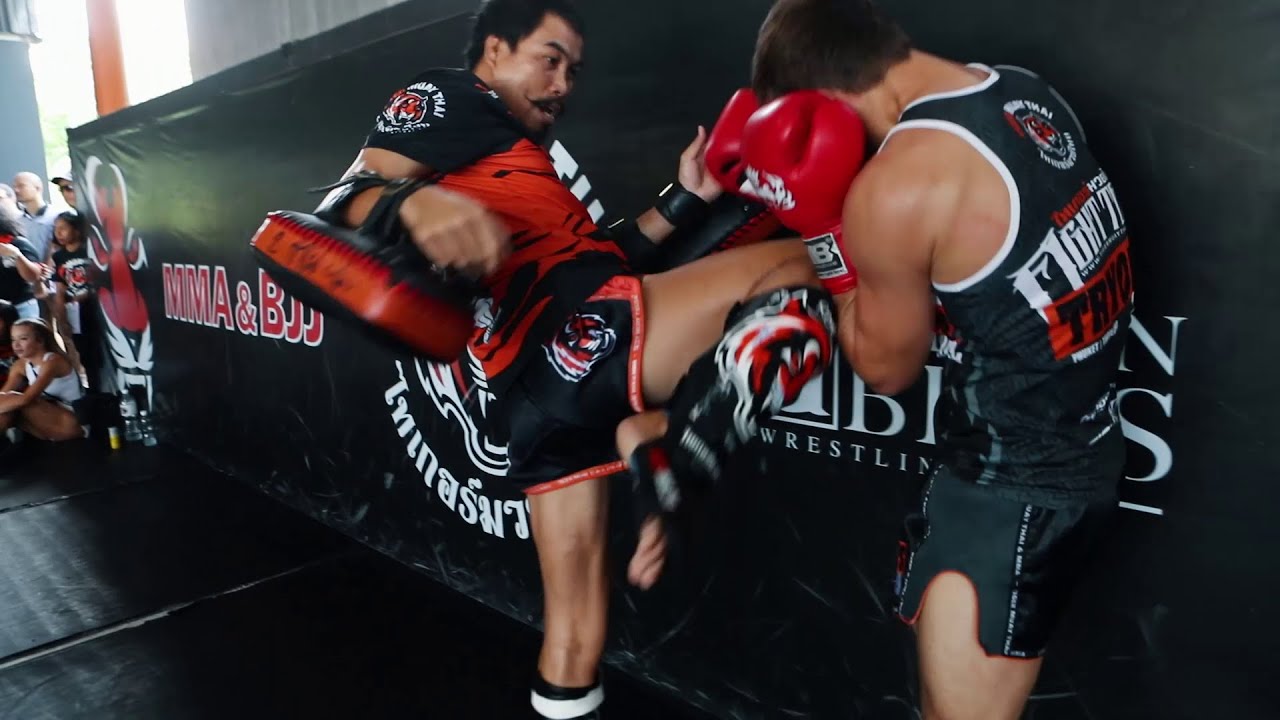 When Pads hit back!22-27th June 2020 will see another group of hungry fighters have the chance to win a year’s scholarship of training, accommodation and food here at Tiger Muay Thai, in addition to a 1 year Thai visa.

We welcome applications from any MMA or Muay Thai/kickboxing fighters. Applicants who are chosen to come and tryout will go through a week of challenging tryout workouts to assess their skills, fitness and heart.

At the end of the week the winners of this year’s Tryouts will be announced and the prizes handed out!

Past winners of the Tiger Muay Thai Tryouts have gone on to phenomenal success. A few of the biggest winners include:

Alex came to the 2014 tryouts with an MMA record of 4-1. Since winning a spot on the team that year, Alex picked up the PXC, AFC and Woolongang titles, before entering the UFC where he has gone undefeated (total MMA record is now 21-1) and defeated Max Holloway to claim the UFC Featherweight world title!

A winner of the 2016 tryouts, Dave went undefeated in his Muay Thai fights since (competing on events such as Prison Fight) before beginning to compete in Lethwei (Burmese bareknuckle boxing). Dave is now the biggest star in all of Lethwei, where he is undefeated and is the reigning World Lethwei Championship cruiserweight champion.

A winner of the 2014 tryouts, George went to see success in promotions such as Kunlun, Art Of War and Phoenix FC, before making the switch to coaching, where has excelled. George is now the head MMA coach of Tiger Muay Thai, and received the award for MMA Coach Of The Year at the 2018 Asia MMA Awards.

Already an experienced Muay Thai fighter, Farida from Kenya won a spot at the 2018 Tryouts. Over the course of the next 12 months, Farida went on a tear, winning big fights in Thailand, Malaysia and China, culminating in beating 2 of the best 54kg fighters in the world to win the WMC I-1 Grand Prix championship in Hong Kong.

Kai impressed at the 2013 tryouts and was an easy pick for the coaches. Kai went on a tear throughout Asia, fighting 18 times in the space of 4 years, before being signed by the UFC. Kai is now ranked 8 in the UFC flyweight rankings!

Argentinian Muay Thai champion Tomi came out on top in the 4-man tournament finale of the 2018 Tryouts to win his spot on the team and become the youngest ever Tryouts winner at just 18 years old. In the 2 years since, Tomi has risen through the Muay Thai & kickboxing ranks quickly and is now a main event fighter on Max Muay Thai and EM-Legend events.

Armenian standout Arman Tsarukyan won a spot on the team at the June 2018 Tryouts and wasted no time in getting to work, scoring a huge head kick KO over Felipe Olivieri in August 2018. Just 5 months later Arman was signed by the UFC, where he has scored an impressive win over Olivier Aubin-Mercier.