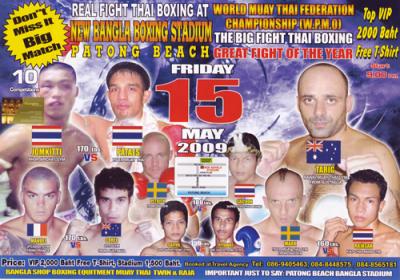 Tiger Muay Thai and MMA training camp fighters will be headlining the fight card at Bangla Muay Thai stadium on the evening of May 15, 2009, Phuket, Thailand.

Prathet makes his return to the ring fighting once every couple months and on a 6 fight win streak with four KO’s. Pratet is a vicious fighter with outstanding hands having 20+ International boxing fights including against former WBO champion Michael Katsidis.

Mark Bisson will be making his Muay Thai debut with his first fight after participating in the VIP training program for the last several months.

Discount tickets and transportation are available in the office or at the guest relation desk at TMT.