Alums Jason Saggo, JP Kruger, and Don “Magic Man” Madge are revving up for their own MMA fights later this month as Tiger Muay Thai and MMA Training Camp Phuket, Thailand gets represented on two continents!

Jason Saggo (7-1) is a longtime friend and guest of Tiger Muay Thai. His upcoming Score Fighting Series bout against Iraj Hadin (6-4) will be televised live on The Score in Canada and AXS TV in the US at 10pm EST on Friday, November 23.

Saggo’s first-round submission victory over Eric Attard in SFS 5 back in August put the 26 year-old in the limelight as one of the top lightweight prospects in Canada. The Ontario-native is a a brown belt in Brazilian Jiu Jitsu and last came to TMT in January 2012. He has been coming to TMT on and off since 2007. 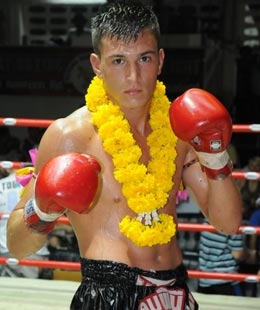 Tiger fighter Don Madge (1-1), who recently came to TMT for a two month training camp in August, will fight in the EFC Africa 17 event on November 23 in Carnival City, Brakpan, South Africa. He takes on Hector “The Enforcer” Britts (3-2).

The welterweight fight puts Madge, ranked as the #2 Muay Thai fighter in his weight class by the World Professional Muay Thai Federation, in prime position for a title shot. Britt is a 33 year-old fighter known for his strength as a standup fighter and will most likely try to bang with the 22 year-old Madge.

Also fighting in the EFC Africa 17 card is fellow South African JP “Tinkerbell” Kruger (2-0) who will go up against Wade “The Goat” Henderson (10-12). Kruger was last at TMT earlier this year in July polishing both his Muay Thai and Brazilian Jiu Jitsu skills.

As a three-time South Africa K1 Champion, the Johannesburg-native will look to utilize his standup skills to overwhelm Henderson from the get-go.

Good luck to all of our alums!