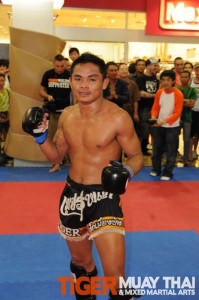 While the guests of Tiger Muay Thai and MMA training camp, Phuket, Thailand were enjoying food and drinks at the BBQ Beatdown this past weekend, Ngoo Ditty was at work in Malasyia. Coached by BJJ Purple Belt Wiktor Svensson, Ngoo competed against former WMC Muay Thai Champion Abbas Ahmadi in a Mixed Martial Arts Bout that was the first of it’s kind in the country of Malaysia.

In front of a sold out Cheras Stadium in Kuala Lumpur, Ngoo, a BJJ Blue Belt under Professor Ray Elbe put on a grappling clinic. Securing an early takedown with double underhooks, Ngoo landed in the half guard before quickly transitioning to mount. With Ngoo attacking with brutal ground and pound, Abbas had no choice but to turn his back, giving Ngoo the RNC submission victory at 2 minutes 15 seconds of the first round.

With this victory Ngoo improves his professional MMA record to 3-2 With International fights against Top Talent in promotions from International countries China, Hong Kong, Singapore, and Malaysia.