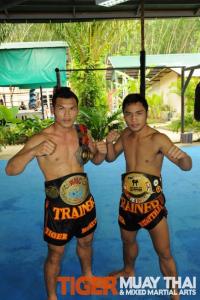 Tiger Muay Thai and MMA training camp, Phuket, Thailand fighter / trainers Ritt and Berneung captured the Championships at Malaysia’s biggest and most prestigious Muay Thai event, “The Royal Cup of Kedah” on May 8-9, 2009 in Malaysia.

Ritt scored a 2nd round KO over an opponent he had two previous losses, but showed he had learned from the prevuios fights winning by KO.

In the main event on May 9, Berneung (Tiger Muay Thai) to on legendary Muay Thai fighter Nam Sak Noi and won a 5-round decision over the former world champion winning the championship belt and the “Ryal Cup of Kedah”