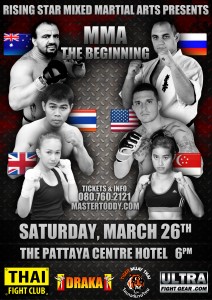 MMA is becoming a global sport, and is quickly making it’s way to Southeast Asia. Proof of that will be Saturday March 26th. While guests of Tiger Muay Thai will be enjoying the BBQ Beatdown, Ngoo Ditty will be fighting MMA in Malaysia’s very first sanctioned MMA fights, and Matt Merria along with Justin Governale will be fighting in Pattaya Thailand.

Justin Governale will be facing Mardsing Suriya of Thailand in a classic Grappler Vs. Striker.
Governale is a BJJ Blue Belt with aggressive striking, while his Thai opponent is a veteran of over 80 professional Muay thai fights. This bout is going to be Amateur with no elbows, no knees to the head, and shin pads. The winner of this bout will be Thailand’s first ever 155lbs Amateur MMA Champion.

Matt Merria is going to be fighting a Russian prospect named Yuri Sovenko. Unwilling to agree to standardized MMA rules, Yuri requested that the bout be conducted under ‘DRAkA’ rules–basically meaning that there will only be 30 seconds on the ground. Matt is a very talented grappler, and the sudden rule change has affected our gameplan, however at the end of an intense 6 week training camp Matt wanted to accept the fight even with modified rules.

These bouts will be shown live on TV within the Pattaya area. Anyone in Thailand interested in attending the event, Tixs are 500THB standing room only, 1000THB for a seat. A portion of the proceeds will go to help Earthquake victims of Japan.