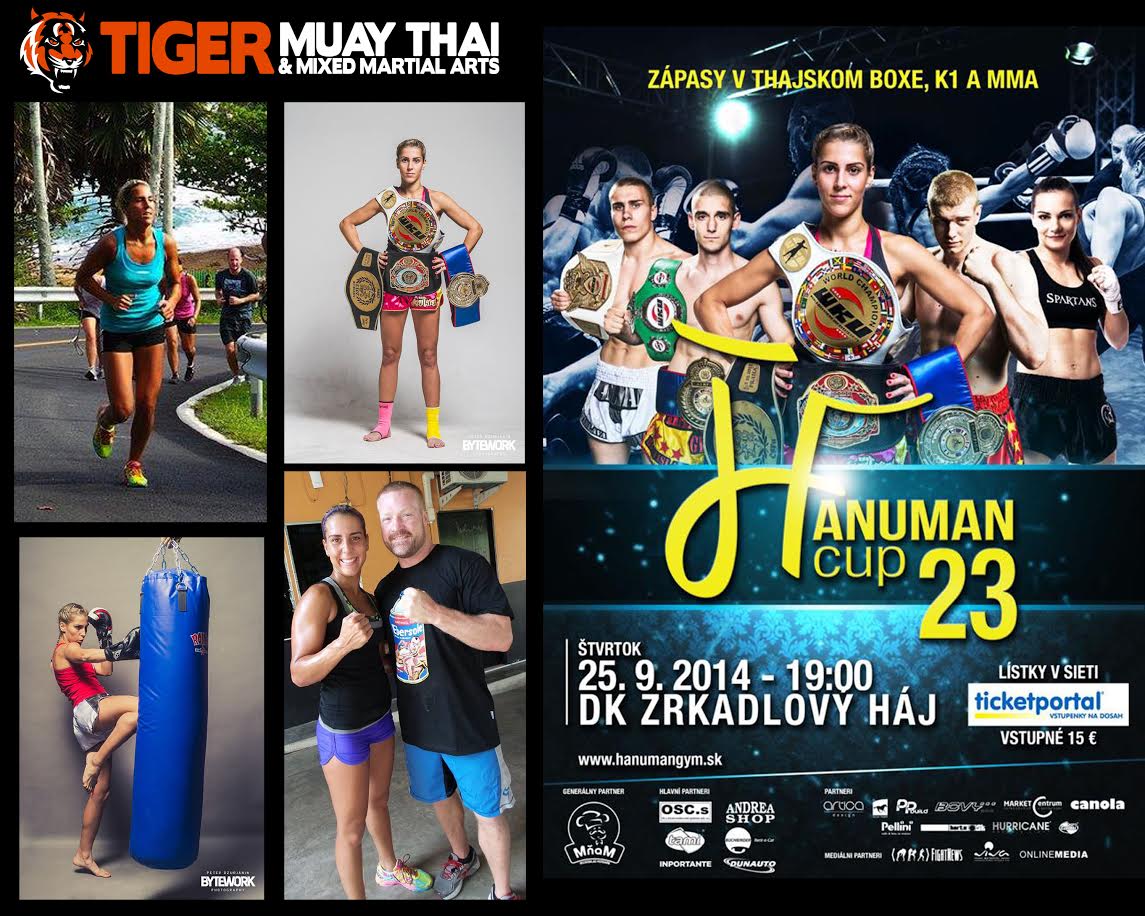 Tiger Muay Thai & MMA Training recently had another World Champion in the camp, Lucia ” The Pretty Beast ” Krajčovič. Congrats to Lucia on her win last night!!!

Lucia’s home gym is Hanuman Gym Bratislava in Slovakia. She also has a record of 28 fights with 21 wins, 7 KOs and around 15 amateur fights.

So what brought her to Tiger Muay Thai?

” I have already been to Thailand before and I was looking for some fight camp by the sea because I was always training in Winterland. So I found Tiger Muay Thai on the internet and lot of things struck me, I was really surprised that aside from Muay Thai, they have a variety of Fitness classes that can be useful for my fight preparation and weight cut. I decided to go to Tiger and did the Crosstraining Classes, the Strength training and Bodyfit. TMT has Incredible bootcamp trainings. I will also never forget The Big Buddha Run, where man fights with himself, but the feeling after any training here is worth it.

Lucie didn’t initially start training to fight back in Slovakia. She started training because she was not doing any sport and only wanted to lose weight. After only 1 month in to her weight loss training, she got exposed to Martial Arts.

” The main reason why I started training at the beginning was my weight. I was overweight and was 72 kg. Only after 1 month in to my exercising and Martial Arts training, I fell in love with it. It was going slowly at start. After 2 years I got my first amateur fight, another one after that and again and again. After all that hard work i got my first fight as a Pro and last year, I won the World Champion Title. I trained at TMT to prepare for my next World Champion Title in November.

She is now dedicated to the sport of Muay Thai and has her own club only for women called Ladies Thaibox. She is also into CrossFit.

She likes training in Thailand due to the climate difference.

” Training back home is very similar as here in Tiger, but here in Thailand it is much more difficult to train because of the climate, temperature and moisture. It’s the best. Train hard, fight easy.”

Lucie’s won her fight last night in Slovakia. The next will be on October and her big fight will be in November for another World Champion Title. She will be facing tough opponents like Julia Berezikova from Russia, Lena Ovchynikova from Ukraine and Joanna Jedrzejczyk from Poland.

When it comes to what inspires her…

“I am inspired by people around me. my family, former or future opponents, people who are taking pictures with me and wishing good luck, my friends and buddies, people who support me, my coach. Just my biggest inspiration are the people around driving me forward.”

” My biggest thanks goes to my mom, who supported me from the beginning and is sitting always in the front row on my fights, My coach, who gives me all that time and energy and all my sponsors, without which I would not be today here in Tiger gym and those are www.optikam.sk, www.profighters.sk, www.muscleworld.sk and www.barber.sk

Tags for this post
Lucia " The Pretty Beast " Krajčovič,