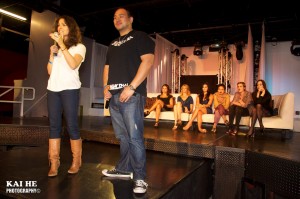 Tiger Muay Thai and MMA training camp, Phuket, Thailand guest, Johnny “The Wolf” showed off his Tiger Muay Thai T-shirt at the 2010 Pick-Up Artists World Summit held in Los Angeles, USA last month. Johnny was interviewed on stage and backstage by film and TV crews as there were more than 10,000 spectators and 300 attendees. Johnny has a following and fan club from his exploits as a famed pick-up artst and came to TMT earlier this year working on his Muay Thai and conditioning.

Congratulations Johnny and look forward to seeing you again soon at Tiger Muay Thai.
We’ll get you another of our famous TMT t-shirts for next years convention 🙂

Check out the “Wolfman’s Blog