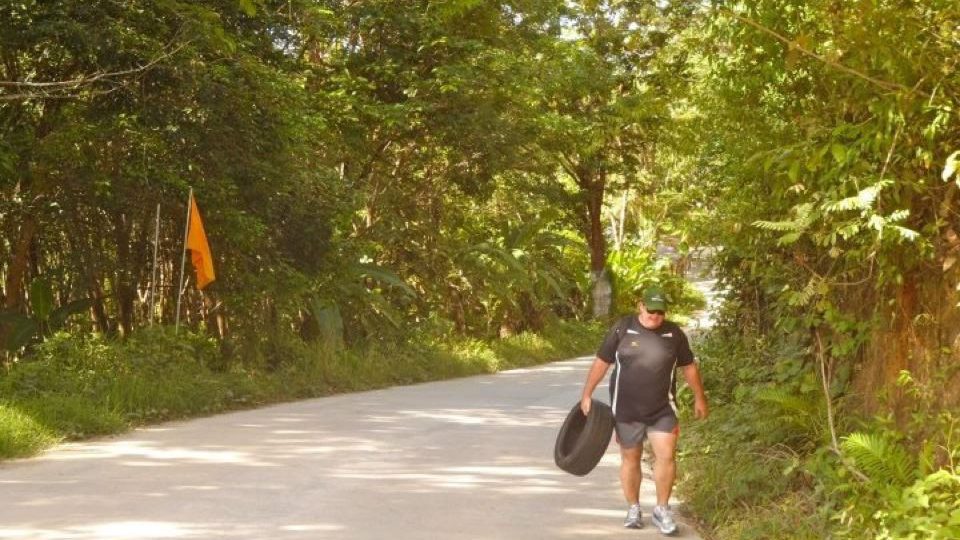 New Zealand – the extreme sports capital of the world where adrenaline sports and fitness pumps through the blood of the nation and people live life in the fast lane. Unfortunately for some, that fast lane can lead to fast-food, excessive drinking and an unhealthy lifestyle.

A product of his surroundings, 39 year old Derek Jones from Auckland knows just how easy it is fall into the trap of a fast paced lifestyle.

When car yard operations manager Derek arrived at Tiger Muay Thai & MMA Phuket in March 2011, he weighed in at hefty 165 kg. A larger than life character, Derek made the journey to Phuket in bid to change his weight, his diet and more importantly – his life.

Derek is not alone. A 2009 study by the New Zealand Ministry of Health showed that one in three Kiwi adults were overweight (37.0%) and one in four were obese (27.8%). For him, it was a combination of alcohol and fast food that lead to his weight gain. It’s an all too common occupational hazard of the wheeler dealer lifestyle. Deals are made in and out of the office and that can often mean – the pub.

“The lifestyle I was living back home was unhealthy. What I found was most evenings everyone wanted me to come around and have a beer with them. I find back home I could be drinking four to five times per week. When you drink, the fast-food becomes too convenient.”

A big fight fan, Jones was familiar with Tiger Muay Thai & MMA Phuket through Facebook. However, it was the success of Tiger’s own weight loss veteran, James Mason that got Derek’s mouth watering. With an appetite for change, Derek approached his boss with a proposal of coming to Tiger not only to improve his own health but also improve the business.

“I mentioned to him under a year ago about Tiger after reading about James online. I told him his story and that I wanted to do the same thing and go to Tiger for six months. He looked at where the business was going and it was the perfect time to take six months off.”

It was a bold move but one that Derek feels employers can benefit from.

“I think if a lot of people in my position were to sit down with their employer they would find that they would understand the problem. The way I see it – if I come back healthier, my mind is going to be clearer and that’s going to be more beneficial to the company.”

Having contacted both James Mason and Tiger through Facebook, Derek realised that social networking sites have a lot to offer people in his situation. He sees Tiger’s Facebook page as a perfect first-step for making giant leaps in weight loss and also making contact with like minded people in similar circumstances. “I first came into contact with James by reading his blog online. I made a comment on one of his Facebook photos telling him that I am coming out soon and I hope that he would be there too. He added me as a friend to Facebook and I found that most nights when I would make a post about my training he will have put a comment there. We feed off each other and support each other. It’s about people communicating with people who have like-minded goals supporting each other. The more people that you can get into that group the better it is.”

Through tracking his progress online, Derek knew that if James could do it – he could too. However he was aware that Thailand is not all sun, sea and squats. The country is world renowned for its parties and clubs. Avoiding these vices was one of his reasons for choosing Tiger Muay Thai & MMA Phuket over other facilities.

“Reading on James’ blog, he had been to a few camps and this was his favourite out of all of them. I looked at Tiger on a map, it’s enough distance from places like Patong where there is a lot of temptation. So it’s great having that slight isolation. If you want to go drink – it’s far enough to think ‘screw that, it’s not worth it.’ Seeing what James had done here himself and the support he got was the main reason to come here.”

James Mason knows all too well the enormity of Derek’s challenge. It’s challenge that he himself has faced at Tiger Muay Thai & MMA Phuket. Having arrived in 2010, fellow car dealer James has gone from 235 kg to an incredible 149 kg. Through a number of high profile media appearances and a successful blog, he has gone on to become a role model for weight loss all over the globe.

“I feel great to inspire and help anybody. Derek is an amazing guy with such a positive attitude,” says 29 year old James. “He has achieved so much already but must stay focused because it is easy to fall back into old habits. Especially when he goes home.”

James’ advice rings true with Derek. He knows that although the battle may be fought in Phuket, the war will take place when he returns back to New Zealand.

“The key when I leave here is not going back to my old ways. I don’t want to spend five months here training my arse off just to yo-yo back to what I was. I will put the effort in now but I will certainly need to change my lifestyle when I get home.”

Together with new mentor James, Derek is following a strict diet plan alongside a high-intensity strength programme devised by Tiger’s own nutrition and fitness guru, Peter ‘Thai Hulk’.

The first day I arrived I was explaining my goals to the girls at the reception, and straight away they said, ‘You need to talk to Peter’. So, I was introduced to Peter who put together a diet programme. I’m not used to eating six times a day but by sticking to it i’ve noticed the changes. I’ve decided to have three private training sessions per week with him too. He’s finding muscles in me that I have not used for a long, long time.”

Though tough at first, Derek knows that time is on his hands. After five weeks of training, he was able to conquer the weight room and lose a staggering 12 kg – well on track for his monthly 8 kg target.

“In the first week there were exercises that I couldn’t manage. But five weeks in, I am knockin’ out four sets of twenty five reps. Peter has taken a real interest in what my goal is. Every Monday I get asked how much I have had to drink at the weekend. I’ve shocked him a couple of times!”

With his diet on the right track, Derek has now opened up his training regime to include many of the first class programmes on offer at Tiger Muay Thai & MMA Phuket. A keen stand-up fighter, he had his eye on the boxing class from the beginning. However, Derek knew he had to prepare himself mentally and physically before stepping back into the ring.

“I have done a little bit of boxing back home so I joined the class here. I found when I first arrived that it looked too hard. So for the first three weeks I did a lot of walking up and down the street. It was a great way to get to know people. They would wave and ask how I was and that can really build your confidence.”

Not content with the pressure of his trainers, Derek is keen to wow his colleagues and friends back home in New Zealand. He knows that through Facebook his progress is under the microscope and with a concerned boss to impress, he must raise his game.

“The pressure is on. Not only do my friends back home want to see progress but also the trainers here,” Laughed Jones. “My boss, Brandon Orlandini is coming out at the end of the month. I’m meeting him in Bangkok for a progress update. Brandon has supported me since day one so it will be great to see him and say, ‘Here I am – I have lost 15 kg!’. I’m really looking forward to that.”

Derek is also expecting a two more of his biggest supporters to visit him in Thailand – his mother and brother. Brother, Murray also plans to train alongside Derek extra support and check-up on his progress.

When his stint at Tiger comes to an end, Derek will continue his journey back home in Auckland. With the encouragement of his family, friends and colleagues, he knows that he can always rely on Tiger’s websites for that extra boost of energy.

“There are a lot of inspirational messages and people showing off their progress on Tiger’s websites.. When I get home to New Zealand, through the website and Facebook alone I will still be able feed off what people are doing and keep the focus. I don’t want to go back to what I was before. Out of a lot of businesses I have seen, I think Tiger has one of the better Facebook pages. The amount of support and feedback on there is just amazing. You certainly get inspired. You go home, log-on to Facebook and you’re back in Phuket.”