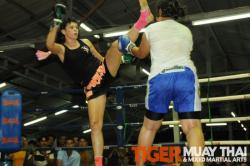 In a much anticipated fight, Chantel (Tiger Muay Thai) will take on Lindsey (Rawai) at Patong stadium on the evening of March 30th, 2009. This looks to be a good fight between to two strong female warriors.

Last year Buakaw did a pad and Wai Kru demonstration at Patong Stadium.