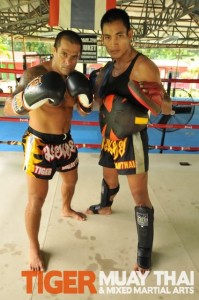 BJJ and Judo Black Belt and 14-2 Vale Tudo Champion Marcello Giudici spent 3 weeks working his Muay Thai at Tiger Muay Thai and MMA training camp, Phuket, Thailand and giving a seminar on BJJ and MMA to TMT training camp guests. Marcello was an outstanding instructor and took to Muay Thai like a fish to water picking up techniques like a true veteran Martial Artist.

He gives a review of his training at TMT on MMA.TV along with several of his videos shot during training with Muay Thai Instructors Yod and Goi.

Marcello was also at the camp with longtime friend Juliano Prado, TMT head MMA coach Ray Elbe’s Master Instructor and part of the ceremony of Ray being awarded his Black Belt in BJJ.